51. What is the purpose of bedding in an underground cable ?

A) To increase the conductivity of the cable

B) To protect the metallic sheath from mechanical injury from armoring (√)

C) To hold the insulators on which conductors are fastened

D) To avoid moisture entering into the cable

54. While conducting a no-load test in a DC series motor, what consequences will occur ?

A) Where heating of the cable is not permitted(√)

B) In temporary joint

56. The starter used for slip ring induction motor is

59. Which of the following DC distribution system is the simplest and lowest in first cost?

60. Which of the following speed is called the actual speed in a three phase induction motor ?

D) Speed of the flux produced in the rotor

61. Which one of the following is not a non-conventional (renewable) source of energy?

A) Motor is reversed in direction

63. ACSR conductors could be joined by using

B) Straight sleeve and nut connector

64. How is the slip ring induction motor connected to the main?

A) Supply to stator winding, rotor winding shorted through resistance(√)

D) Supply to both windings while starting, rotor winding disconnected after starting

65. Which one is used to generate power in geothermal station?

A) Heat in the atmosphere

B) Heat inside the earth(√)

C) Heat in the ionosphere

D) Heat of the sun

66. The no-volt coil is used as a protective device in a motor starter. What is its main function ?

B) Open the supply circuit on failure or reduction of voltage, and automatically reclose it on return of normal voltage

D) Control motor voltage and keep it at a safe value

67. Non-conductor of an overhead line, including service lines erected across a street shall at any part thereof, be at a height less than ___________ meters for high voltage lines.

68. In the manual star-delta starter, the stop button connection is in series with the

69. Equipment used for pulverizing the coal is known as

71. The depth of pole below the ground level on a normal soil should be

A) One fourth of the height of the pole

B) One fifth of the height of the pole

C) One sixth of the height of the pole(√)

D) One eighth of the height of the pole

72. When the three phase squirrel cage induction motor is started by star-delta starter, the starting current is reduced to

73. Which of the following is conventional source of energy ?

74. The terminal markings of a separately excited DC generator as per Indian standard is

A) Weight of the conductor

B) Current through the conductor(√)

D) Ice deposition on the conductor 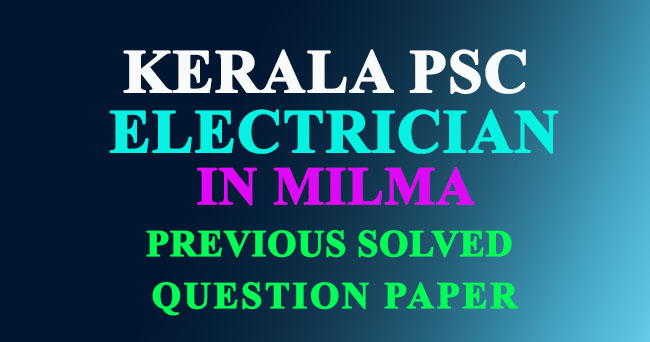