26. A mother devolved chicken pox 1 day after delivery of a male baby. Immediate action to be taken:
(A) Give VZIG to baby(√)
(B) No need of treatment
(C) No VZIG give Acyclovir to the baby
(D) Immediately give vaccine and VZIG to the baby

27. Pick the false statement about Ebola infection :
(A) Dead bodies possess a risk of transmission to others
(B) Fruit bats are reservoirs
(C) Fomites can transmit infection
(D) Caused by Orthopox virus(√)

35. In the emblem of WHO the staff and the serpent shown is :
(A) Staff of Auscualpius (√)
(B) Cadeucius Staff
(C) Staff of Aaron
(D) Staff of hygea

39. The drug of choice for plasmodium falciparum malaria for north eastern states is :
(A) Chlorquine
(B) Quinine
(C) Artemesinin - Sulfadoxine/Pyrimethamine
(D) Artemether - Lumefantrine(√)

44. All are indirect methods of demography except :
(A) Life table
(B) Sisterhood methods
(C) Hazard models
(D) Census(√)

45. The equivalent number of years in full health that a newborn can expect to live based on current rates of ill health and mortality is :
(A) HALE (√)
(B) DALY
(C) QALY
(D) PQLI

47. The bias which occurs when patients who have died or recovered will be erroneously excluded, skewing the results towards individuals who are average could be best explained as :
(A) Berkesonian bias
(B) Misclassification bias
(C) Lead time bias
(D) Neyman bias(√)

49. A group of non-diseased doctors were followed up for development of lung cancer. After 20 years investigator noted that number of study subjects in the cohort developed Peripheral vascular disease (PVD). He did a case control study by taking cases as those with PVD and controls from the same cohort. This is :
(A) It is not an acceptable design as the intended design was a cohort
(B) It is a block design cohort
(C) It is a cross over design
(D) It is a nested design(√) 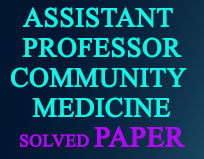