Author -  siju s Date - 12/10/2017 09:21:00 PM assistant sales civil supplies ranked list assistant salesman alappuzha ranked list
KERALA PSC ASSISTANT SALESMAN IN CIVIL SUPPLIES CORPORATION ALAPPUZHA RANKED LIST 2017
Ranked List No. 1118/17/DOA
Category No. 222/2015
The Kerala Public Service Commission (KPSC) is a body created by the Constitution of India to select applicants for civil service jobs in the Indian state of Kerala according to the merits of the applicants and the rules of reservation.


The following is the ranked list of candidates for the post of ASSISTANT SALESMAN - ALAPPUZHA  on `4510-6230 in KERALA STATE CIVIL SUPPLIES CORPORATION LTD, found suitable by the Commission and arranged in the order of merit based on the OMR Test held on 27/08/2016. This Ranked List is brought into force with effect from 22/11/2017.
.
Ranked List: Download 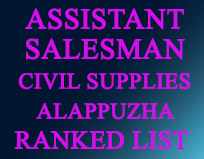