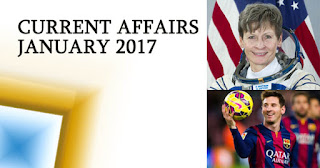 
2. Who was sworn in as 44th Chief Justice of India?
Ans: Justice Jagdish Singh Khehar


3. Name the BCCI President who was recently sacked by the Supreme Court of India.
Ans: Anurag Thakur


4. Who is the new Chairman of the Union Public Service Commission (UPSC)?
Ans: David R. Syiemlieh


6. Name the one-man commission appointed by the Government of Kerala to prepare a, report on reforms to be implemented in prisons in the state?
Ans: Alexander Jacob Commission


7. Name the former Australian cricketer who was recently inducted into the ICC Cricket Hall of Fame?
Ans: Arthur Morris


8. Who is the new president of the Kerala Cricket Association?
Ans: B. Vinod Kumar

9. Which was declared the first elderly friendly city in Kerala?
Ans: Kozhikode


10. Which screenplay writer, director, and lyricist was been selected for this year's Rakendu Award?
Ans: Sreekumaran Thampi


12. Who was named as the World's Best Playmaker for 2016 by the International Federation of Football History' & Statistics (IFFHS)?
Ans: Lionel Messi


13. Sorin Grindeanu is the new prime minister of which European country?
Ans: Romania


14. Who is the captain of the Kerala team for the Santosh Trophy football tournament?
Ans: P. Usman


15. Where was the 77th session of the Indian History Congress held?
Ans: Kariavattom (Thiruvananthapuram)


16. Where was the 27th meeting of the Southern Zonal Council held?
Ans: Thiruvananthapuram


18. The year 2017 has been designated by the United Nations 70th General Assembly as _____.
Ans: The International Year of Sustainable Tourism for Development


20. Which Booker winning novelist and art critic, popular for his book ‘Ways of Seeing', passed away recently?
Ans: John Berger


21. Which international organisation has lifted a 3-year ban on the import of vegetables from India?
Ans: European Union


22. Name the Hindi writers who were selected for the 2016 Bharatiya Jnanpith Navlekhan Award?
Ans: Shraddha and Ghyansham Kumar Devansh. The award is presented to young writers in Hindi.


23. National Consumer Day was observed on:
Ans: December 24
Ø On this day, the Consumer Protection Act, 1986 received the assent of the President.


24. Who is the new Lieutenant Governor of Delhi?
Ans: Anil Baijal. He succeeded Najeeb Jung.


29. Name the new human organ claimed to have been discovered by scientists recently?
Ans: Mesentery


31. Name the states in which Assembly elections are going, to be held in February and March?
Ans: Uttar Pradesh, Uttarakhand, Punjab, Manipur and Goa


32. Where was the 2017 Pravasi Bharatiya Divas held?
Ans: Bengaluru


37. Which cricketer became the first player in the world to score a hundred in all the eleven nations that have hosted tests?
Ans: Younis Khan


39. Jovenel Moise was elected as the president of which Caribbean country?
Ans: Haiti


44. Who won the SAF Women's football title?
Ans: India. They defeated Bangladesh in the final.