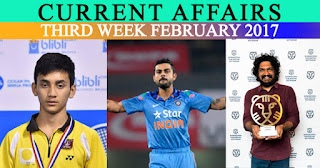 2. SAARC Programming Committee meeting was held in which city?
Kathmandu

3. The Government of India has decided to set up how many tourism zones in the country to boost tourism?
Five

4. Who stepped down as the captain of the English cricket team?
Alastair Cook

6. Who is the new Managing Director and Chief Executive Oficer of the National Stock Exchange?
Vikram Limaye

7. Who became the second Indian cricketer after Sachin Tendulkar, to appear on the cover page of the Wisden Magazine?
Virat Kohli

10. Who heads the six-member committee formed by the central government to suggest ways to improve India's Hajj policy and look into the issue of subsidy for the pilgrimage?
Afzal Amanullah

12. The Indian Davis Cup team defeated which country to progress into the second round of the Asia Oceania Group I?
New Zealand

13. Who directed the movie, 'Sexy Durga' which won the Hivor Tiger Award at the International Film Festival of Rotterdam?
Sanal Kumar Sashidharan


15. Which became the first country in the world to stop investing in fossil fuels?
Ireland

16. Which medical college hospital is to start the first government clinic in Kerala exclusively for transgenders?
Government Medical College, Kottayam

17. The two new All India Institutes of Medical Sciences (AIIMS), proposed in the 2017-18 Union Budget, are to be set up in which states?
Jharkhand and Gujarat

18. Which Indian picked up six wickets on the last T20 against England?
Yuzvendra Chahal

20. Which state government has launched India's first social innovation centre?
Telangana
It has been named the 'Kakatiya Hub for Social Innovation'