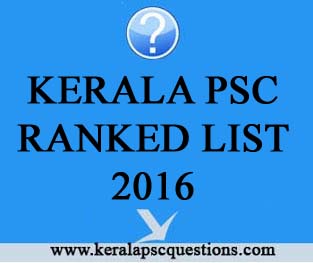 Ranked List No. 40/2016/SS V
Category No. 52/2014
The following is the list of candidates for selection to the post ofJUNIOR PUBLIC HEALTH NURSE GRADE II (NCA-LATIN CATHOLIC) ON R 11620   ­   20240/- IN HEALTH SERVICES DEPARTMENT IN PALAKKAD DISTRICT (Category No. 52/2014), interviewed and found suitable by the Commission and arranged in the order of merit for recruitment against the NCAvacancies for LATIN CATHOLIC  community. This Ranked List is brought into force with effect from 03.02.2016 and will be valid until the candidates are advised and appointed against the vacancies notified due to the paucity of candidates belonging to  LATIN CATHOLICcommunity, in the Ranked List published on 26.08.2009(Category No. 301/2007) for the above post.