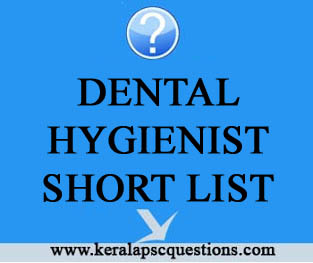 The following is the Short List containing the Register Numbers of candidates who are found provisionally eligible to be called for interview, for selection to the post of DENTAL HYGIENIST GRADE II - State wide (Category No. 010/2012) in HEALTH SERVICES DEPARTMENT  on 11620-20240/- on the basis of the Online Examination held on 28/09/2015.


The Register Numbers are arranged in their numerical sequence and the arrangement does not in any way, indicate their respective rank on the basis of the said test. The candidates whose numbers are included in short list are directed to be present for verification of original documents as per schedule published in notification.
Main List

Note:-(2)The list has been prepared by including the number of candidates who have secured top marks in the Online examination.

Note:- (3)The candidates who have secured 3.67 (Three  (point)six seven) and above are included in the Main List of the short list and the requisite marks have been lowered to the extent necessary in respect of the Supplementary list.

Note:- (4)Candidates belonging to Other Backward Classes included in this list who are required to produce Non Creamy Layer Certificate as per G.O (P) No: 81/09/SC/ST/DD dated 26.09.2009 shall produce the same along with the other documents mentioned above at the time of verification of original documents. SC/ST candidates shall produce 2 copies of caste certificate obtained from Revenue Authorities not below the rank of Tahsildar as specified in Kerala Gazette.

Note:-(5)For online examination, rechecking and revaluation are not allowed but printout of answer sheets will be issued to those candidates who apply for it remitting the prescribed fee after the publication of Ranked List. Detailed instructions will be published in the Ranked List to be published for the post.