1. Who is known as the father of Indian Cricket ?
K.S.Renjith Singji

2. Who was the first Captain of Indian Cricket Team ?
C.K.Naidu

3. “One More Over is a book” written by
E.A.S.Prasanna

4. The Captain who lead India to her first test victory?
Vijay Hazare

5. Where is “Chepauk Ground” situated ?
Chennai

6. Who was the first batsman to score three centuries at Lord’s?
Dilip Vengsarkar

7. The only team to be dismissed twice in a single day of test match.
India

8. Who was the first Indian batsman to hit a century on debut against England in England?
Abbas Ali Baig

9. The first Indian batsman to bat on all five days of a Test.
M.L.Jaisimha

10. The only Indian cricketer who have won four successive Man of the Match awards in One-day Internationals.
Sourav Ganguly

11. The only player in the history of Test cricket to score a century in each of his first three test matches.
Mohammed Azharruddin

12. Who holds the unique distinction of being the only bowler to dismiss Don Bradman courtesy of a hit-wicket?
Lala Amarnath

13. Who was sent back home from the tour of England in1936 due to disciplinary reasons.
Lala Amarnath

14. The Indian Batsman who batted in all positions from 1-11.
Vinoo Mankad

15. The first batsman declared run out by a third umpire decision in the history of cricket?
Sachin Tendulkar 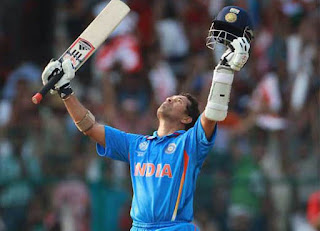 16. “Straight from the Heart” is a book written by
Kapil Dev

18. The first Batsman to score a triple century for India ?
Veerender Sehwag against Pakistan

21. Wankhede stadium is located in?
Mumbay

22. Sachin played his first One day international against which Country?
Pakistan on 18 December 1989

23. Which Indian cricketer is known as "Brown Bradman"
Sunil Gavaskar

24. Who was the first Indian to take 16 wickets in a single test match?
Narendra Hirwani

25. Who is the first Indian Batsman to cross 10000 runs in Tests?
Sunil Gavaskar

26. Who was the captain of the Under-19 Cricket team who won the World Cup in March-2008?
Virat Kohli

28. Which English player smashed Yuvraj Singh for 5 sixes in an over in the one day tournament held in England?
Dimitri Mascarenhas

29. Kapil Dev Played his first test match in the year?
1978 Against Pakistan at Faisalabad.


30. Against which team did Virender Sehwag make his one day international debut?
Pakistan on Fool’s Day, 1999 at Chandigarh. He scored only 1 run and Pakistan won the match by 7 wickets.

32. Tendulkar made his first One day century against?
Australia on September 9, 1994 at Colombo in Sri Lanka

33. The 1984-85 seasons, 2nd ODI between India and Pakistan at Sialkot- India were 210/3 with Vengsarkar 94*. Match abandoned. Why?
That match was abandoned after hearing the news of Indira Gandhi being killed

34. The famous spinner who made his test debut against India at Sydney, in 1992 ?
Shane Warne.

35. India’s Lowest Total in One Day International Cricket was against which country?
India scored only 54 runs against Sri Lanka in Sharjah on the 29th of Oct 2000.

38. Who is the only cricketer to have played for England and India?
The Nawab Of Pataudi (Senior)

39. The highest number of catches taken by a non-wicketkeeper in an entire Test for India?
Yajurvindra Singh (India) at Bangalore, 1976-77

40.Which county did Sachin Tendulkar play for?
Yorkshire

41.Which Indian bowler claimed his 300th one-day international wicket against Netherlands in a pool-a match of the 2003 world cup?
Javagal Srinath

42.Where did India play its 1st one day international match?
Headingley on 13/07/1974, India lost the match by four wickets.

43.Who was the 1st ODI captain for India?
Ajit Wadekar

44.Where did the 1st ODI match was played in India?
Ahmedabad

45.Who was the first captain of Indian Test team?
C K Nayudu

46.What is the middle name of Sourav Ganguly?
Chandidas

47.How many runs did Sachin Tendulkar was scored in his ODI debut?
Master Blaster is out for a DUCK, against Pakisthan on 18 December 1989.

48.Who was the man of the match of the 1983 World Cup Final ?
Mohinder Amarnath.

49.Who was named India's Cricketer of the Century by Wisden?
Kapil Dev

50.Which Indian batsman was the first to hit 44 fours in a test match innings?
V.V.S.Laxman