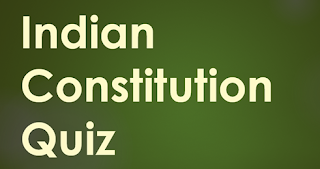 1. Who declares the financial emergency
(A) President
(B) Prime Minister
(C) Finance Minister
(D) None of the above

3. Article 20 of the Fundamental Rights represents which subject
(A) Equality of opportunity in matters of public employment
(B) Protection in respect of Conviction of Offence
(C) Protection of life and personal liberty
(D) None of the above

Protection in respect of Conviction of Offence

4. Article 21 of the Fundamental Rights deals with which subject
(A) Protection of certain rights regarding freedom of speech,
(B) Protection in respect of conviction of offence
(C) Protection against arrest and detention in certain cases
(D) Protection of life and personal liberty

Protection of life and personal liberty

6. After declaration of financial emergency by the President, what is the period of operation without approval by the Parliament
(A) Three Months
(B) Four Months
(C) Two Months
(D) One Month

7. Within what period, the Parliament has to approve Financial emergency declared by the President (A) Six Months
(B) Two Months
(C) Three Months
(D) Four Months

8. In Financial Emergency, salaries and allowances of which groups get reduction
(A) Central Government Employees
(B) Judges of the Supreme Court and High Courts
(C) A & B
(D) None of the above

9. Raj Pramukh represents whom under the Indian Constitution
(A) President
(B) Governor
(C) A & B
(D) None of the above

13. Which constitutional article provides personal immunity to the head of the states for his official act from legal action, including proceedings for contempt of Court
(A) Article 361
(B) Article 362
(C) Article 368
(D) Article 369

14. Under which constitutional articles, newspapers do not have the right to publish report of the proceedings of a secret session of either of the Houses of Parliament or Legislative Assembly & Legislative Council
(A) 361
(B) 361A
(C) 361B
(D) 361C

15. Spell out the condition under Article 361A by which any person or newspaper cannot be sued for legal proceeding if any report of proceedings of Parliament and State Legislature is published

(A) The report must be a report of the `proceedings' of a House of the Union or a State Legislature. Hence, it must be relevant to a motion or other business before the House, and must not have been expunged
(B) It must be a ‘report” as distinguished from one article or `Comment'.
(C) Such report must be substantially true. Hence, an extract or a garbed or perverted report would not be protected. The reporting must not be actuated by malice
(D) All of the above

All of the above

16. Any Court including Supreme Court does not have constitutional right under Article 143 to exercise jurisdiction over any dispute arising out of any provision of which agreements that were in operation before commencement of the Constitution
(A) Treaty, Agreement
(B) Covenant, Engagement
(C) Sanad
(D) All of the above

All of the above

20. Under which Constitutional Article, Union Government has the power to give direction to the State Govt. regarding any of the provisions of the Constitution
(A) Article 368
(B) Article 362
(C) Article 365
(D) Article 367