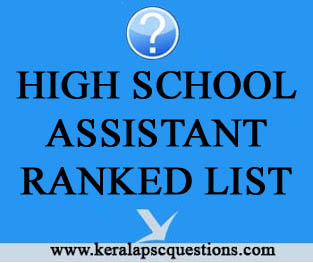 The following is the list of candidates for selection to the post of HIGH SCHOOL ASSISTANT (SANSKRIT) on RS.14620-25280/- in EDUCATION DEPARTMENT IN PALAKKAD DISTRICT, interviewed and found suitable by the Commission and arranged in the order of merit. This Ranked List is brought into force with effect from 24-11-2015
CLICK HERE TO DOWNLOAD THE RANKED LIST

NOTEI : Candidates who wish to obtain a photocopy of their OMR answer sheet (Part A& Part B) relating to this selection shall remit the fee of Rs.300/- in any of the Treasuries in the State (Head of account: 0051 PSC-800-State PSC-99 other receipts). The duly filled in application in the prescribed form (available from the Commission's website www.keralapsc.gov.in) along with the original chalan should be submitted to The District Officer, Kerala Public Service Commission District Office, Palakkad within 45 days from the date on which this ranked list is brought into force. A copy of an answer sheet will be issued only once to a candidate. Copies of OMR answer sheets invalidated due to any defect will not be issued. Candidates are prohibited from applying for a copy of an answer sheet which is not their own, and legal proceedings will be initiated against those who do so. The last date for receipt of applications is07.01.2016 Applications received after the prescribed date will not be entertained.

NOTEII: A period of 45 days time to apply for rechecking of Answer Scripts will be allowed to candidates with effect from the date on which this Ranked List is brought into force. The candidates can avail only one chance.

"Applications for rechecking of answer scripts should be submitted in the prescribed form available free of cost from the Enquiry sections of the various offices of the Commission or its photocopy, or downloaded and printed in A4 size paper from the Commission's Website www.keralapsc.gov.in or photocopied there from. Applications submitted in any other manner will not be considered."

The application for rechecking, along with original chalan receipt for the prescribed fee of Rs.75/- under the head of account "0051 - PSC 105 State PSC 99 - Examination Fee", addressed to The District Officer, Kerala Public Service Commission District Office, Palakkad should reach the office on or before 07.01.2016. Application for rechecking received after the stipulated time will not be entertained and fee once remitted will not be refunded.

NOTEIII : "Any candidate can relinquish his/her right for appointment in writing duly attested by a Gazetted Officer of State/Central Government with signature, name, designation and Office Seal. The request for relinquishment received within 15 days from the date of publication of Ranked List will be honoured against the requisitions of vacancies that are pending with the Commission upto the finalisation of Ranked List. After the publication of the Ranked List, the request for relinquishment will be considered only if such request is received on or before the date of receipt of requisition based on which he/she is to be advised".