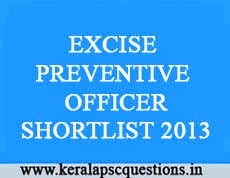 The following is the Short List containing the Register Numbers of  candidates who are found provisionally eligible to be called for Physical  Efficiency Test and verification of original documents for selection to the post of  ‘EXCISE PREVENTIVE OFFICER (Category No.340/2010) in Excise Department on Rs.6680 – 10790 on the basis of the Objective Type Test (OMR Valuation) held on 25.07.2012.

The Register Numbers are arranged in their numerical sequence and the arrangement does not in any way indicate their respective rank on the basis of the said test.

Note 1.Inclusion of Register Numbers in this list is purely provisional subject to  scrutiny and admission of applications on absolute basis. Inclusion of  Register Number in the Short List does not confer any right on the  candidate to be called for Physical Efficiency Test or for subsequent  inclusion in the Ranked List.

Note 2. The Short List is prepared based on the details furnished by the  candidate in the application and subsequent claims made will not be entertained at any stage.

Note 3. The date, time and place of Physical Efficiency Test and verification of  original documents will be intimated in due course. All the candidates who have appeared for the OMR Test are included in this Short List

Note 4. According to the existing procedure, revaluation of answer scripts is not allowed. But candidates can apply for rechecking of their answer scripts and can also obtain a photocopy of answer scripts by remitting the prescribed fee after publication of the Ranked List for the post. Detailed instructions will be found in the Ranked list notification for this post