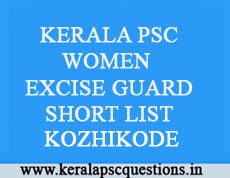 NOTIFICATION
The following are the Register Numbers of candidates who are found provisionally eligible to be called for Physical Measurement and Physical Efficiency Test for selection to the post of WOMEN EXCISE GUARD (Category No.240/2010) on Rs/- 5250-8390 (PR) in EXCISE DEPARTMENT in Kozhikode district notified in the gazette dated 31.08.2010, on the basis of the Objective Type Test (OMR) held on 03/09/2011.
The Register Numbers are arranged in their numerical sequence and the arrangement does not in anyway, indicate their respective rank on the basis of the said test. The alphabet 'D' shall be prefixed to the Register Numbers to indicate Kozhikode District.