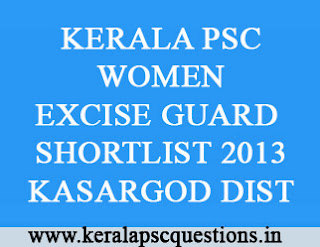 The following is the Short List containing the Register Numbers of candidates who are found provisionally eligible to be called for Physical Measurement and Physical Efficiency test for selection to the post of WOMEN EXCISE GUARD - Kasaragod (Category No. 240/201 0 ) in EXCISE Department on Rs. 5250 -8390 on the basis of the Objective Type Test (OMR)held on 03/09/2011.

The Register Numbers are arranged in their numericalsequence and the arrangement does not in any way, indicate their respective rank on the basis ofthe said test. The candidates whose numbers are included in short list are directed to be present for verification of original documents at the time of Physical Measurement and Physical Efficiency Test, the date and time of which will be published later. Alphabet 'B' shall be prefixed to all Register Numbers to denote Kasaragod District