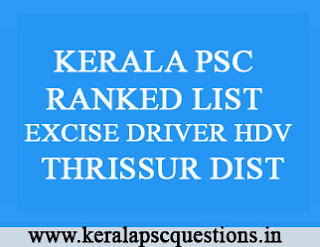 The following list contains the names of candidates found suitable on the basis of the result of the Objective Type Test (OMR Valuation) held on 06.02.2010 and the practical  test along with verification of original documents of candidates included in the Unified Short List published on 13.07.2012 for selection to the post of DRIVER (HDV)on `4990- 7990 (P.R)in the Excise Department in Thrissur District, (Category No.118/2007 & 119/2007) arranged in the order of merit. The Ranked List is brought into force with effect from 02.07.2013. The Ranked List will be in force till the publication of a new Ranked List after the expiry of a minimum period of one year or till the expiry of three years whichever is earlier. Candidates from this list will be advised for appointment in accordance with the rules and orders regarding reservation and rotation as amended from time to time, if applicable, against vacancies reported to the commission during the pendency of the list. As the advice for appointment depends on the occurrence of vacancies, there is no guarantee that all candidates included in the list will secure appointment. The candidates remaining in the list at the time cancellation will have no claim at all for appointment on the basis of the inclusion of their names in the list.