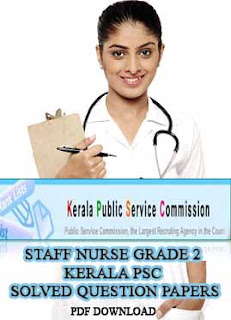 1. The most common pathogenic mechanism of acute pancreatitis is –
Auto digestion of the pancreas.

2. What does the nurse monitors for, in a patient with Acute Renal Failure?
Pulmonary edema and ECG changes.

3. A disease caused by Treponema pallidum is –
Syphilis.

4. Which of the following is an important nursing intervention for a patient with Cushing Syndrome?
(a) Left Middle Cerebral Artery
(b) Observe for hypotension
(c) Protect from infection (√)
(d) Restrict carbohydrate intake.

6. Which one of the following is a common response expected in a patient with stroke, to the change in body image?
(a)Denial
(b) Dis association
(c) Delusion
(d) Depression. (√)

7. A patient with early osteoporosis must be advised to-
Stop smoking

8. For doing nasotracheal suctioning, during which of the following patient activities, the catheter should be inserted?
(a)Swallowing
(b) Inhaling (√)
(c) Exhaling
(d) Retching

9. The simple most effective method for reducing the risks of stasis of pulmonary secretions is-
Two hourly position change.

10. What is cyanosis?
Blue discoloration of skin.

11. The period from conception to birth is denoted as –
Prenatal

12. Role of nursing is “having charge of somebody’s health” Whose vision is this?
Nightingale

13. Which of the following developmental stage corresponds to infancy?
(A) Trust Vs Mistrust (√)
(b) Autonomy Vs Shame
(c) Initiative Vs Guilt
(d) Industry Vs Inferiority.

14. Who proposed the nursing theory of self-care deficit?
Dorothea

16. The leading cause of death in adolescence is –
Accidents

17. The legal definition of ‘death’ that facilitates organ donation is, cessation of –
Function of brain

18. The body temperature at which tissues and cells can best function is –
36-38o C

19. Men have a higher Basal Metabolic Rate because, their body contains more-
Testosterone

20. The mechanism by which body loses heat to the environment, without having direct contact is --?
Radiation

22. Exposure of the body to subnormal temperature can lead to …
Frost-bite

23. What is the effect of an antipyretic?
Reduce fever

24. The volume of blood pumped by the heart during one minute is called….
Cardiac output

26. The phase of respiration in which gases move in and out of the lungs is ….
Ventilation

27. What is the normal partial pressure of carbon dioxide in arterial blood? (mm Hg)
35-45

28. What is the equipment that indirectly measures arterial oxygen saturation?
Pulse Oximeter

29. What is the term used to denote regular, abnormally slow respirations?
Bradypnea

30. What technique of assessment helps to determine ketoacidosis?
Olfaction

31. Inflammation of skin at base of nail is?
Paronychia

32. The condition in which both eyes do not focus on an object simultaneously is known as?
Strabismus

33. The most effective way to break the chain of infection is by?
Hand hygiene

35. The prescription orders 0.125 mg digoxin orally. Tablets containing 0.25 mg is available. How many tablets will you administer?
1/2

36. A patient who is receiving intravenous fluids develops tenderness, warmth, erythema and pain at the infusion site. Which of the following conditions will you suspect?
(a) Sepsis
(b) Infiltration
(c) Fluid overload
(d) Phlebitis (√)

37. When providing oral hygiene to an unconscious patient, care must be taken to prevent?
Aspiration

40. The prescription is for two tablespoons of milk of magnesia. How many ml. will you give?
30 ml

41. Which of the following is intravascular fluid?
(a) Lymph
(b) Pleural fluid
(c) Plasma (√)
(d) Synovial fluid

42. If the serum potassium level is less than normal, the condition is known as –
Hypokalemia

43. What electrolyte abnormality is likely to develop in a patient with vomiting?
Hypokalemia

45. What is the primary cause of hyperkalemia?
Renal failure

46. Which of the following is an isotonic solution?
(a)Lactated Ringers (√)
(b) Half – Saline
(c) One-third Normal Saline
(d) Mannitol

47. Thousand ml. of Normal Saline is to be infused in 8 hours. What should be the rate of flow per minute?
30 drops

48. A patient admitted with vomiting, has the following arterial blood gas levels-pH 7.30; PaCO2 36 mm Hg; Pa O2 92mm Hg; and HCO3 18; what is the acid-base imbalance that is present?
Metabolic acidosis

49. Which of the following is a first-line drug used for pain management?
(a)Acetaminophen (√)
(b) Clonidine
(c) Morphine
(d) Ketamine

50. Which of the following is the organism that causes peptic ulcer disease?
(a) Staphylococcus
(b) Coryne bacterium
(c) Helicobacter pylori (√)
(d) Streptococcus.